The Eperlecques Blockhouse is the largest blockhouse in the north of France, a witness to the dark period of 1939-1945. Open to the public since 1973, it was classified as a Historic Monument in 1985.

In 2019 a V2 landed on its original launch pad, each year a new piece of equipment is added to this historical park.

When you visit the Blockhaus at Eperlecques, you will discover an authentic launch pad and its V1 ready to take off. 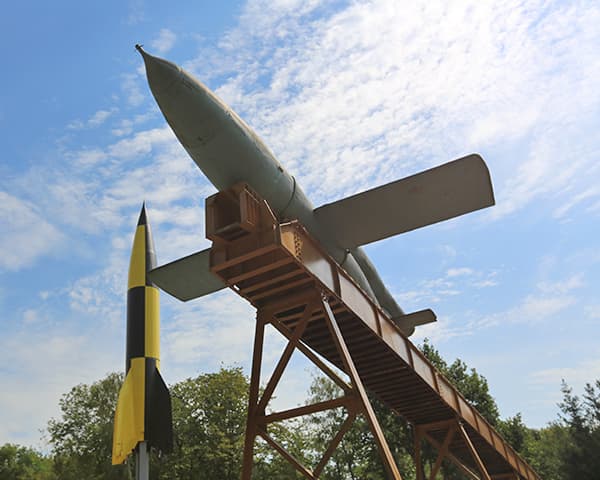 The site of Eperlecques was chosen to build the first fully autonomous V2 rocket launch base.

The V2s were designed at the German army's experimental station in Peenemünde with the participation of the German engineer Wernher Von Braun.

The V2s were mass-produced in the DORA underground factory in the "Mittelbau".

The letter "V", usually used in the sense of Versuch (prototype) means here Vergeltung, i.e. "reprisal". Indeed, the V2s were launched in response to Allied bombing.

The Tallboy bomb fell during bombing raids on Eperlecques:

On 19 June 1944, 17 Tallboy bombs were dropped on Eperlecques, one of which created a huge crater 30 m in diameter which caused a seismic wave on the floating slab where 3 compressors were already installed.

The officers of the time decided to dismantle the 3 compressors already installed and to abandon the BLOCKHAUS.

On 25 July 1944, 17 Tallboy bombs were launched by the RAF and one of them fell on the roof of the Blockhaus. The impact is still visible on the north ridge.

In January 1945, a sign warned the inhabitants of Eperlecques of the risks incurred during the bombardment of the blockhouse by the British and the Americans.

"Do not exceed this limit, if the red flag is hoisted, bombing in progress, all the ground up to 500m around the building is dangerous. (according to Marcel Delaplace: aerial activities in the sky over Watten and Eperlecques and the region 1939 - 1945).

The mission of the RAF and the USAF: to test new bombs. The bomb tests took place from 3 February to 18 July 1945.

In January 2009, the deminers of the Sécurité Civile are on the roof of the blockhouse. A security perimeter was set up.

The DISNEY bomb was invented by Captain Terell of the Royal Navy.

Intended to attack heavily concreted structures, it fell from 20,000 to 5,000 feet, at which altitude its electronically ignited propellant was activated to give it an impact speed of 720 m/s, i.e. more than Mach 2 on the sound speed scale !